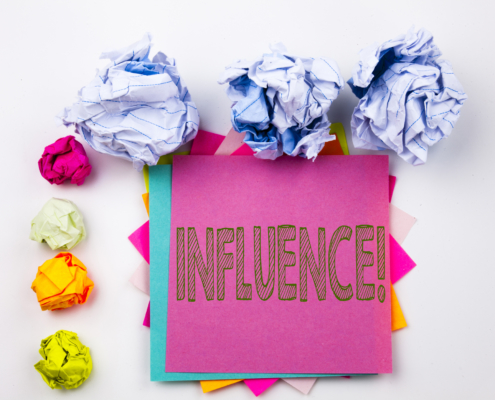 Influencer marketing is now a common concept for many companies. Getting admired people to use your products and let people know via their social media channels is now a standard issue marketing tactic. The more influential the person the greater the chance of your product or service doing well in terms of sales and being seen organically rather than via paid advertising. Influencer marketing has grown to such an extent that Amazon has launched its own influencer programme.

In the Western world, influencers are seen as opinion leaders who are not formal experts, but have authority with the target audience and are often well-known people, celebrities, pop, sports or media stars

From a customer’s perspective influencer marketing can be as good as or better than a word of mouth recommendation, so it is easy to see why it has become such a powerful tool for businesses. This is because people are ignoring traditional company adverts and seeking greater authenticity from people they view as trusted or more authentic.

However, when things go wrong with influencer marketing they tend to go spectacularly wrong. Therefore, it is important to have a back-up plan and various contingencies in place to handle any fallout from such a PR disaster.

One example is that of Phillip Morris International who had to cancel a global social media campaign when it was revealed that they were using young influencers to promote their vaporiser range.

The company had previously been trying to demonstrate that they are encouraging people to stop smoking and present vaping as a safer alternative. However, they are now having to apologise for sending out the wrong message by using an under 25 year old to promote their IQOS vaporiser.

Critics of vaping believe that it is just as problematic as smoking cigarettes and see that vaping activity is very much a gateway to other things for young people. As such this latest PR scandal does not help the company at all in terms of changing the perception that they aren’t trying to glamorise vaping.

The company released a statement “We have taken the decision to suspend all of our product-related digital influencer actions globally. Whilst the influencer in question is a legal age adult smoker, she is under 25 and our guidance called for influencers to be 25+ years of age. This was a clear breach of that guidance.”

Perhaps this campaign failed because it is a delicate and controversial area to start – it’s connected to smoking which is not safe. However, Phillip Morris International isn’t the first tobacco company to struggle finding an appropriate path through the online marketplace. Juul e-cigarettes also were criticised back in 2015 for using images of attractive young people on YouTube marketing and social media. The campaign was particularly surrounding their product launch and used the phrase “Share a #Juulmoment.” This prompted many young people to not only use the product but share images of their own usage along with their friends and even of them at school.

Following a backlash of this approach the company have since adopted a policy of only using social media influencers over the age of 35.

For Phillip Morris International this recent furore has done little to help prove the company is demonstrating a duty of care to young people or to those trying to quit smoking. In reality it has been viewed in poor taste and has been damaging from all angles.

Snickers found out the hard way in 2012 when they chose the controversial Katie Price to use as part of their “You’re not you, when you’re hungry” global campaign. Price is known for dividing opinion and primarily famous for her involvement in fashion and entertainment. When a series of tweets appeared of a political nature from her account it led people to believe she had hacked when in fact it was part of the aforementioned Snickers campaign.

There was a public backlash to the posting and it even prompted the first ever influencer marketing investigation by the Advertising Standards Agency.

The choice of influencer was probably ill advised when attached to a national brand.

When Pepsi partnered with Kendall Jenner in 2017 on a YouTube advert they found themselves having to pull the ad after a negative response from the public. According to Pepsi they were trying “project a global message of unity, peace and understanding.” In reality the company were accused of trying to trivialise issues of social justice – in particular demonstrations by the Black Lives Matter movement.

The company were seen to be insensitive to serious ongoing issues and the article was pulled and PepsiCo issued an apology.

How to mitigate failure with influencer marketing campaigns

Choice of influencer is key

When things go wrong on social media for businesses it could prove to be catastrophic, which is why platform and influencer selection is so important in the planning stages of any successful influencer marketing campaign.

Before going live with any posts or activity having a failsafe campaign should be the primary goal alongside campaign contingencies.

Research the objectives and target market

With the benefit of hindsight, it is perhaps easy to see why things went so wrong for these companies and they act as a cautionary tale to others to do their research well. Social media in general gives exposure to companies like never before which is why when using influencers especially, proper research needs to happen into the target market, the objectives of the campaign and the alignment of appropriate influencers.