How To Write The Perfect Press Release 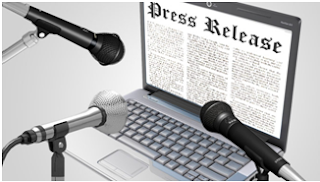 Press releases are a somewhat traditional and ever popular arrangement
for the contacting of journalists and other press associates by communications
and public relations teams. But as journalists receive dozens of press releases
every day, grabbing their attention with your particular press release is vital
and equally difficult. That’s we have created our guide to help you write the
perfect press release.
Before You Begin
Writing

If there is time it is a good idea to look around the site that
you are sending the release to and note their general style, tone and popular
subject matter/angles. Try to incorporate this new found information in the
writing of your release, as this will instantly make it more relevant to the
site and it will also catch the journalists’ eye.
The Headline/Subtitle

When writing the headline, consider yourself in a
journalist’s shoes. If you were writing a story on this subject matter, what
would a short, snappy and attention grabbing headline be? Consider the type of
headlines you found on the site you are sending the release to, and incorporate
this into the creation of yours. A good judge of length for a headline is
‘would it fit in a Twitter update with room for a web link?’. If the answer is
no, then you need to cut it down.
Topic and Language

When writing the body of the release, consider the site you
are sending to and their readership. The use of too much technical language or
a boring topic will not win over the journalist, as they will be considering
why their readers would care about this story. So tailoring the angle and
language to their readership will answer that question for them, and will mean
the release stands out to them as a worthwhile story to run.
Paragraph
structure

It is best to get the overall point of the press release in
at an early stage, preferably somewhere in the first couple of paragraphs. This
allows journalists to read on with the knowledge of what they are actually
reading about, rather than reading blind until the very end (and often they
won’t read that far). The length can also put people off, so keep it to a
maximum of one A4 page, half is even better.
It often happens that you will waffle on to fill an A4 page
and end up putting the essential stuff at the bottom when you start to realise
you are running out of room. A great rule to follow is to write your first
draft, go away and have a coffee and a break, come back and reassess your
release as if a journalist reading for the first time. Read it out loud, and
the natural order will become clear to you. Often the end paragraph becomes the
introduction, and other paragraphs will get swapped around a few times before
it feels right, but just keep going away and coming back to it until you don’t
feel the need to change any more, and you will know the structure is correct.
Quotes and Case
Studies

When you include quotes and case studies, these should
always be relevant to the angle of the piece. Journalists are not a huge fan of
lots of quotes or large case studies, so avoid filling the body of the article
with them. It’s good to use one or two quotes and a short reference to a case
study if relevant and necessary, but don’t include full blown interviews and
case studies.
If the people quoted or cases mentioned are relevant to the
journalist’s angle on the story they will contact you to arrange an interview
with these people to get their own quotes and information on their case.
Therefore ensure these people are willing and available for interview around
the time of sending the release.
At the bottom of the press release always leave an email
address AND phone number for the main PR contact for arrangement of interviews
with the relevant people and for gaining further information.
Sending
Your Press Release

Don’t simply send your press release as an attachment with a
short phrase saying ‘see attached press release’. The journalist wants to know
why they should look at this press release, so include an attention grabbing
subject line and a summary of the press release’s main points within the body
of the email. Try not to go below the fold when writing an email summary, as
more detailed information is contained within the release itself, so you just
need the key points.
Some journalists prefer the release attached to be in PDF
format, and others would rather have a plain text version, so to be on the safe
side and keep everyone happy attach both a PDF and plain text version of the
release. Also attach 2-3 relevant images to the email if you have any, as this
saves a lot of time for the journalist, and puts you in their good books!
Check out our guide on ‘HowTo Write The Perfect Pitch For A Press Release’ for more information on
what to include when pitching to publications via email.