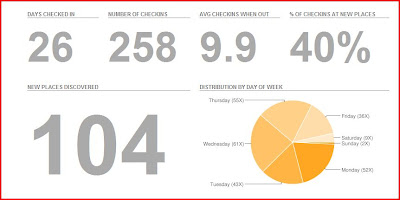 Foursquare is a mash-up between an online loyalty card and geo-social networking tool. It’s in the category of Location Based Services (LBS).

Users access Foursquare from their smartphone and when they arrive at a specific destination, they ‘check in’. In theory organisations can reward regular customers (the most loyal customer becomes ‘the mayor’) and encourage potential customers to share their wallet, with a range of special offers.

I was slightly sceptical and decided to adopt foursquare for a month to understand how it works, the user’s perspective and the benefits for businesses. This post looks at the User perspective and I’ve shared my stats above!

Signing up is easy, the usual user name and password and As soon as I’d signed up and checked-in to my first venue I received my first badge, the Newbie.

To become Mayor you need to be the most frequent visitor within 30 days. If you make more visits than the current mayor they are ousted and everyone knows, as emails and updates appear, sharing the news. You can visit a venue more than once in a day but points are only awarded for a single daily check-in. It’s essential to have a photo to become mayor, even if it’s a meaningless image.

The competitive element means that some users

Foursquare allows you to connect your Facebook and Twitter accounts to share updates. This lets users update their social media accounts whilst on the move. The downside is that if you’re busy bagging venues, you’re constantly updating all your accounts whilst checking-in, regardless of whether you’ve actually stopped. My friends quickly became frustrated seeing my updates as ‘checked-in to abc venue’. Some said it was boring as there was no commentary attached and there was no real dialogue. Others said nothing, but stopped following me on Twitter and removed my updates from Facebook. More context can be added to a venue with a ‘shout’ but few seem to use this function.

I got around this by checking-in ‘off the grid’ but the downside is that this doesn’t gain any points or badges. Then I realised I could check-in share with friends on Foursquare but remove sharing with Facebook and Twitter.

Many of the foursquare badges are unavailable in the UK. It’s very USA centric and focuses mainly on cities. This means venues in smaller locations in the UK are added by a few brave souls trying to encourage early adoption. It also means that I’m mayor of a couple of venues that have never heard of Foursquare.

If you check-in at too many venues too quickly a message appears telling you ‘whoa! No points for rapid fire check-ins, stay a while’.

There are also strange venues. People’s houses, beds and sitting rooms are classified as venues. One of my friends has created ‘stuck in traffic outside…’ as a venue. I’m not sure I want to check-in to someone’s house if I don’t know them.

On the practical side, there are challenges. Exploring venues in the area is dependent upon the availability of Internet access. Without this, it simply doesn’t function. Sometimes there is a delay between checking-in and gaining points, so a warning message appears ‘ok we’ve got you at … but your phone thinks you’re a bit too far away, so no points or badges this time.’ opening Foursquare on an iPhone uses up lots of battery. Nearly one per cent every time you re-load places or check-in. Some venues are in the wrong location and my phone this I’m too far way when I’m in the reception area.

There is a scary side too. You can see how many others are at the venue and others can see you too.

As a user I won’t continue with Foursquare. Too few rewards outside big cities, friends unhappy about the constant sharing of where I am and a degree of concern about sharing my constant whereabouts.

Added to this Facebook Deals has now been launched….