Hashtags – all you need to know

What are hashtags and how can you use them?

Does the concept of hashtags leave you feeling slightly confused? Are you trying to use hashtags to promote your business, but not meeting with success? Hashtags can be incredibly powerful tools, but like everything else to do with social media, there are right and wrong ways to use them. Up your hashtag game and sparkle on social media with this post.

Prior to the advent of Twitter, the hashtag was known as the pound sign, and was just another largely-forgotten keyboard symbol, most frequently used in automated phone interactions. But these days, the humble pound sign or hash key is now the hashtag, a hugely useful and potentially powerful way of categorising social media content—on Twitter, Facebook, Instagram, and other platforms.

The purpose of the hashtag is fairly simple: it’s a way of categorising the Tweets, posts, and other social media content you create. Using hashtags helps you organise your content, and it also helps your audience find it.

The Three Kinds of Hashtags

Invented by Chris Messina a a way of grouping themes and content aorund a single idea, hashtags have significantly developed.

Business-motivated hashtag users tend to use them in one of three different ways.

The example below focuses on coffee and if this was in your product portfolio, you’d probably follow and join into the conversation. 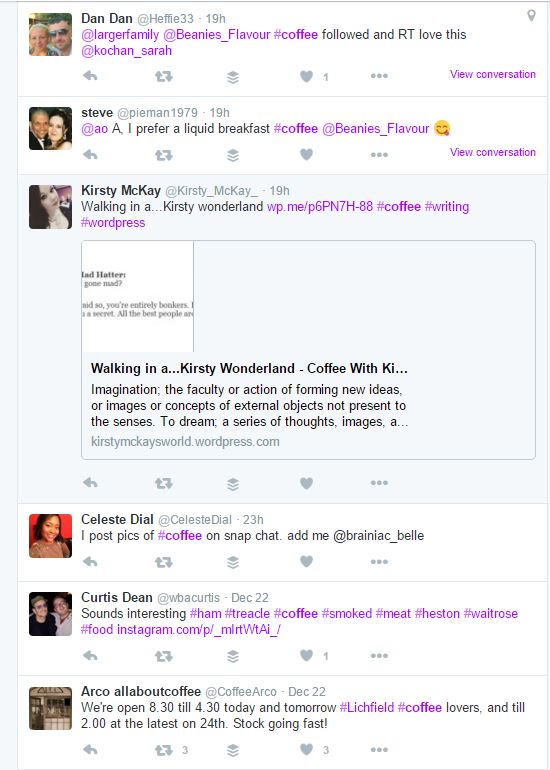 The biggest mistakes that new users tend to make with content hashtags are adding too many hashtags, or adding hashtags that are too general. For instance, if you run a company that sells fresh organic juices, then hashtags such as #healthy or #juice aren’t going to get you very far. Instead, aim for a higher degree of specificity, and go for something like #LiquidOrganic or #ToastYourHealth. To find the right content hashtags it can be helpful to look at competitors and see what kinds of hashtags they’re using. You don’t necessarily need to use the same ones, but checking out brands that are already successful on Twitter can give you a good idea of how to begin.

Trending hashtags are a potentially powerful tool for boosting brand visibility, because these are the hashtags that reflect what people are talking about in the moment. However, they’re also the hashtag category with the biggest potential for a spectacular and highly visible failure. When brands use trending hashtags it’s easy for the brand to appear opportunistic and insincere, so it’s important to treat lightly.

When Pepsi made an error of judgement in an online ad, Pepsi was trending, but not for the right reasons. The image below shows the conversations around the Pepsi hashtag. 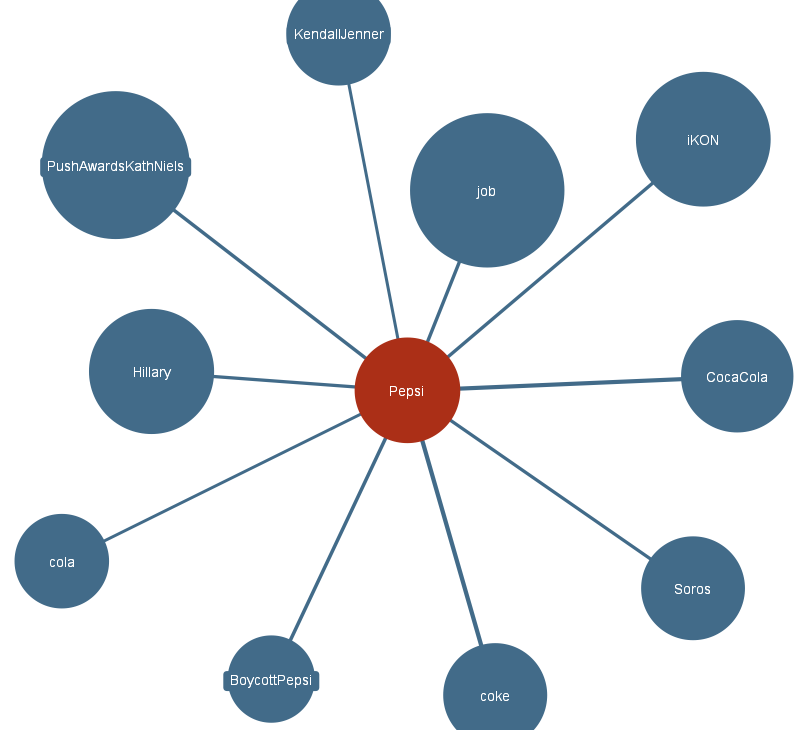 To ensure success, it’s important to remember that your contribution to a trending topic should add value to the conversation that people are having. You can’t just promote your brand and slap a trending hashtag on the Tweet or post—when you use trending hashtags your content should be directly related to the topic at hand, and should offer a fresh, insightful, or humorous take on the conversation. When it comes to trending hashtags, the best approach is to forget you’re advertising a brand and speak with sincerity.

Trending hashtags reflect what’s going on in the moment, and typically reflect the day’s headlines and happenings. One brand that’s well-recognised for its ability to use trending hashtags well is the American restaurant chain Denny’s, which has become known for its irreverent brand of humour. One of the brand’s most successful moments came in the furore over Apple’s 2016 decision to remove the headphone jack from the iPhone 7, when the Denny’s account tweeted: “true innovation would have been replacing the headphone jack with a flapjack”. And because Denny’s creates moments like these, it can afford to occasionally use trending hashtags for advertising, as in this April, 2018 Tweet that references the latest Star Wars movie: “Denny’s has got your back when you return from exploring the galaxy! You’ll probably want some coffee. And some pancakes too, who knows. #Hansolo”

It’s unlikely that this brand of humour would work for another restaurant chain as well as it does for Denny’s. The key reason the account has been so successful is that the company has done its homework in terms of identifying and target its Millennial audience. Denny’s understands its audience, and understands exactly the kind of humour that appeals to them. It’s witty, irreverent, and a little bit sarcastic, and manages to avoid the kind of self-conscious insincerity that often comes with Twitter brand promotion.

Brand-focused hashtags are those that specifically reference you or your business. They’re a way to help you differentiate your brand from all the others, promote your brand, and launch marketing campaigns. Using hashtags in this way is important because, while content hashtags focus on the content you produce, they don’t specifically highlight your brand.

When choosing brand-focused hashtags it is most important that you use hashtags that aren’t currently in use by any other individual, organisation, or business. It must be unique, and should reference your brand, or a branded product, by name.

One of the most successful such uses was The Coca Cola Company’s #ShareACoke campaign, which was developed to coincide with the launch of a product initiative that allows people to personalise Coke bottles. The #ShareACoke campaign was a huge sales driver, and also prompted people to make and post their own content using personalised Coke bottles, which generated even more publicity for the company.

Few companies have the resources to launch such a sophisticated campaign, but nonetheless, small brands can create their own moment by choosing and using hashtags with care.