Internet Use in the USA

The USA represents one of the world’s biggest online markets. In 2017, internet penetration reached 87.9%, with 286 million internet users in the country. While this figure compares well to those of Europe and the UK, there are some unique issues to address in the USA, in terms of internet access and service quality.

Internet Penetration in the USA

Internet penetration in the USA is much higher than the world average of 51.7%, but falls slightly short of UK and European figures. It’s also important to note that while internet penetration overall is high, the USA falls short in terms of home high-speed internet access—which is at just 73%. As of 2017, 90% of UK households have access to the internet, while for the European Union as a whole, the figure was at 85.7% in 2017.

Within the USA, however, there are significant gaps in internet penetration and use that occur along division lines of age, income, and other factors.

Age as a factor in internet use in the USA

Gender as a factor in internet use in the USA

Across gender lines, there’s very little difference between percentages of adult male and female internet users—and the gap was never very wide to begin with. In 2000, 54% of men were internet users, compared with 50% of women. The gap had all but closed by around 2013, and in 2018, 89% of men and 88% of women are internet users.

Race as a factor in internet use in the USA

Income as a factor in internet use in the USA

In 2000 the income gap between internet users and non-users stood at 50%, but in 2018 it has narrowed considerably. While higher income-earners are still more likely to be internet users, lower income-earners are now now more than twice as likely to have access than in 2000. However, while the gap is smaller it is still very much in evidence: in 2018, 81% of those earning up to $30,000 have internet access; over that figure, 96% of people have access.

Community as a factor in internet use in the USA

Whether they live in urban, suburban, or rural communities, more people have internet access in 2018 than they did in 2000. However, a significant user gap still exists between rural and other users. As of 2018, 92% of urban and 90% of suburban adults have access to the internet. In contrast, just 78% of those living in rural areas have internet access.

However, while all of these figures examine total internet access, they don’t differentiate between home and mobile internet access. This is an important distinction to make, given the difference in quality and consistency of home versus mobile connections.

Home versus Mobile use in the USA

While a large proportion of Americans have internet access, a fairly large proportion access the internet only via mobile. Just 73% of American adults have broadband internet at home. And again, age, race, income, and community type all play a role in determining who is more likely to have access. Along all lines of division, the difference between those with home access and those without is much more significant than the difference between those with internet access at all.

As of 2016, 12% of American adults have a smartphone, but don’t have high-speed internet access at home. Black and Hispanic people., young people, and low-income earners, are all more likely to have mobile internet access as their only form of internet access.

What Challenges does the USA Face in Providing Quality Internet Access?

The majority of the problems that the USA faces in terms of providing internet access are related to two main issues. First, that infrastructure is increasingly unable to bear the burden of close to 290 million internet users; and second, that this and other issues is exacerbated by a lack of competition in the ISP market.

Overall, the USA is held back by poor infrastructure—which is only becoming more outdated, and less able to cope with the demands of advancing technology and expanding populations. In many regions, both urban and rural, infrastructure upgrades are needed before access is available: cross-country fibre-optic cables must be laid, and individual houses must be connected to the network, in order to provide access. This is particularly problematic for rural areas and farmland, and in many such areas internet options are extremely limited. And even though dial-up or low-speed broadband may be more readily available than a fibre connection, the benefits of such access can’t compete with those of high-speed internet.

That’s not the nation’s only problem. The second primary issue is a lack of competition, which leaves consumers who want high-speed internet with very few options. Geographically speaking, the western half of the USA is dominated by Verizon: in the vast majority of this region, Verizon is the only ISP available. And in the east the situation isn’t much better, with most regions having at most two options from which to choose. Here, the market is dominated by Verizon and its primary competitor, AT&T.

The sheer size of the USA means that providing high-speed internet to the entire country is a significant undertaking. But the problem is more than the size of the project: it’s that with the exception of Google and its only moderately successful Google fibre project, no ISP has really made the commitment to improving internet access and speed. They simply have no incentive to do so, when competition is all but non-existent, and there are no government mandates forcing them into action. According to current US law, the internet is a public utility—but despite this, the availability and quality of the service is left up to private companies to manage. The quality of the country’s internet service is further threatened by the net neutrality debate, which may allow ISPs to block or slow down access to certain kinds of internet traffic, purely for the financial gain of selling that access back to consumers. 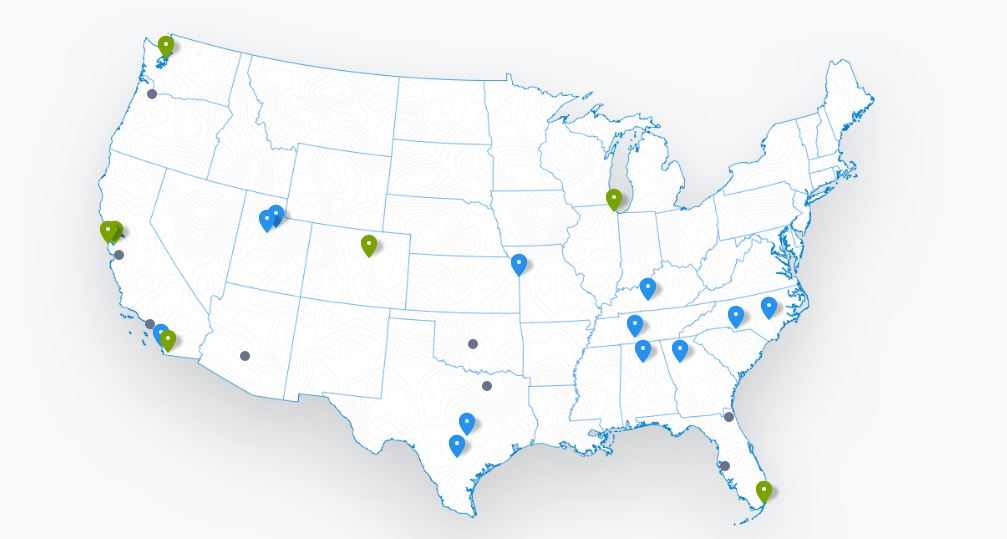 In short, while the USA enjoys high internet penetration, there are many weak spots both in terms of internet availability and quality, and in the laws that govern it. It’s certain that fairly radical changes would be needed in order to eradicate these issues and ensure high-speed internet access for the country as a whole.