It is the latest social media platform to have broken into the mainstream. It initially attracted large numbers of young users but has recently become a familiar name.

Brands need to be aware of new platforms such as TikTok and the target audiences, to decide if they need to be part of that conversation.

TikTok is a social media platform for short form videos. It originated in China, where it is known as Douyin, but it has since spread worldwide. TikTok has approximately 524 million active users around the globe. Douyin remains one of the most popular social networks in China and it is also particularly popular with younger audiences. TikTok remains most popular among teenagers and the under 25s.

TikTok began as a space for users to share videos of themselves lip-syncing to music but users have uploaded a wide range of content, including short comedy sketches, videos of various talents, and even some more serious content.

In the early days TikTok was banned from India due to the widespread sharing of inappropriate adult content and for the same reasons, it remains unavailable in Indonesia.

TikTok has taken advantage of the trend for more interactive and video content in social media and it has managed to attract a significant number of users away from older video sharing sites like YouTube. Growing numbers of brands are now sharing content or ads on TikTok.

How Can Businesses Use TikTok?

Creating your own account is the first step to marketing on TikTok, as with any other social network. Your business needs to have an authentic presence on the platform. You can use this to create and post your own short videos and to interact with other users. It is essential to develop a feel for the site and the kind of content that succeeds on it.

Typically new social media accounts have few followers and one way to be seen in these environments is to be promoted by those with larger accounts. This often falls into the arena of influencer marketing which is increasingly popular on TikTok. If you can find an influential account that is relevant to your brand then this can be an effective way to reach out to your target audience. It is unlikely to be free as most influencers seek some form of exchange, either as payment or promotional goods.

The offer looks similar to that from Snapchat with the use of Lenses, the difference is the concept of brand takeovers – this is not for the fainthearted! If you are interested in advertising, you need to fill in the form and register, this was the same with Snapchat at the start too. 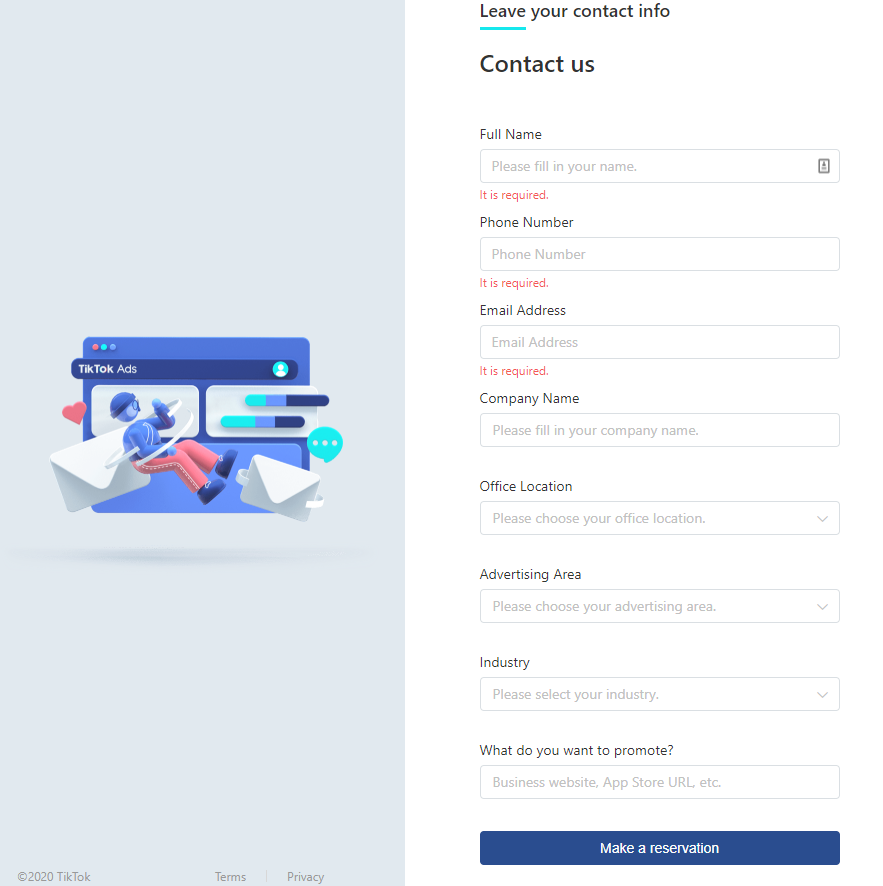 Examples of successful Brands on TikTok

Many brands are already using TikTok to reach out to the platform’s young and active audience. Three of the most effective marketing campaigns were:

GUESS created the #inmydenim hashtag challenge, which encouraged large numbers of TikTok users to create videos in the brand’s products. The challenge was a great fit for TikTok as it was visual, creative and style-based.

For National Avocado day, the US restaurant chain Chipotle created a hugely effective TikTok video that combined a popular meme (The Guacamole Song), a hashtag challenge (the #GuacDance) and a special offer to draw customers into restaurants. This video made Chipotle the best performing brand on TikTok with over 500 million views.

Coke showed what a big brand can do on TikTok by adapting its Share a Coke campaign to the platform and to its forerunner, Musical.ly. It used key influencers and song lyrics printed on Coke bottles to inspire more than 900,000 responses from users.

Is TikTok Right for Your Business?

TikTok’s popularity is a big draw for many brands but it is vital to determine whether it is the right place to advertise your business. There can also be pressure t simply adopt a new channel as it’s there. Many newer channels have come and gone – remember Bebo, Friends Reunited, Google+, Vine, YikYak? They don’t always last. Yet TikTok is owned by Byte Dance that has had funding from strong supporters including AliBaba.

In the early growth stage, social media channels tend to focus on building the audience, this moves into advertising – normally starting with bigger players with large marketing budgets, as anchor advertisers. When they have evidence of results, it’s often scaled and smaller businesses can get involved.

TikTok can be a good place for businesses that are targeting a younger demographic. Since it is a video platform, TikTok also favours brands with strong visual branding, products that look good on film, and the resources to create the right content. Your videos must fit with the TikTok style and your brand.

You should also ensure that you will be able to reach your target audience through TikTok. Although TikTok is becoming more popular with a wider range of users, approximately 41% are within the 16-24 age group. If Gen Z is your target market, then this could be the best place for your marketing campaign, especially as 90% of users remain active on a daily basis and the platform is less saturated with advertising than other social sites.

If you’re running a fun, young, and creative brand, then TikTok could be a great fit for reaching the elusive younger market. However, you should still be aware that the popularity of social networks can fade just as quickly as it grows and the younger users you can reach there now are often the first to move on to new platforms.

However, the one denominator with the examples of successful Brands on TikTok so far, is that they have larger budgets, great graphics and teams available to monitor the feedback. When a video becomes
viral it means that it has gained its popularity through internet sharing,  including email sharing,
social media and video sharing sites such as Youtube.

Successful viral videos
are often humorous, such as The Lonely Island’s ‘Lazy Sunday’ sketch from
Saturday Night live. They can range from being TV sketches, internet only
productions or simply events caught on camera by eye witnesses.


The key element of any viral video is content. It must be
fresh, relevant and unexpected.  If a
video is being used for promotion it should make creativity a priority over
advertisement as this is vital to any viral video. The content should appeal to
the audience you are trying to target, make it speak to them by covering a
topic that interests them and use language they are familiar with. The best
viral videos cover topics that are discussable and relatable, showing something
shocking or surprising that evokes a strong emotion compelling viewers to share
it.
Videos with strong viral appeal often include or reinforce a
positive message acting as a call to action, encouraging viewers to share it. A
good example of this is Dove’s ‘Real Beauty Sketches’ which was aimed at a female
audience, encouraging them to challenge their views of their own bodies. The
video ‘Kony 2012’ by Invisible Children Inc. contained a powerful message
asking viewers to share the video to raise awareness of the plight of children
kidnapped and forced to fight in Joseph Kony’s guerrilla army. ‘Kony 2012’ has
since become the most viral video in history with over 99,000,000 views (May
2014).
It is important to optimise your video for online access and
sharing. Studies have found that most viral videos are shorter in length as web
users generally have less time and a shorter attention span with regards to
watching content online. Choosing an eye catching title and thumbnail for your
video will also help to make it searchable and easily identifiable, important
ingredients for videos that go viral.
To get a compelling, relevant video to make the jump to
viral status, you need to get it in front of the right audience. Viral videos
are shared by digital influencers and taste makers like popular celebrities
with large bases of followers. Once they share a video, it is then curated by
other users. An important process in sending a video viral, as people are more
likely to click on and watch a video if it has been shared by a favourite
blogger or friend.
As a video’s hits begin to rise, a mob mentality takes hold
and web users are more likely to spend their time watching a video that has a
large amount of views. This is because they assume the video is worth watching
if other users before them have chosen to spend their time watching it. To
begin gaining this momentum some businesses decide to use paid for advertising
such as Youtube promoted videos or Facebook ads.
Ultimately, it is impossible to ensure that a video achieves
viral success. Even if you have incorporated all of the key ingredients, the
video still relies on its viewers to take it to a viral level.
http://ift.tt/18fJrnY